I know what you are thinking. It’s only been a couple of months since my last exam, so why lose sleep over yet another, especially during the summer holidays? 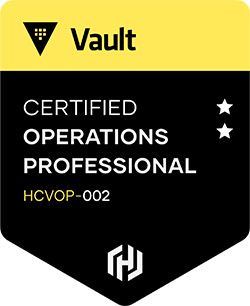 I originally planned to end my HashiCorp training spree after obtaining the Consul certification, but after spending a lot of time with Vault Enterprise recently, I decided now was as good a time as ever to make an attempt.

The Vault Operations Professional exam is a new lab-based exam, so other than Bryan Krausen’s latest course (discounts here), which, to be honest, is all you will need, there’s not much in the way of training material released yet (at the time of writing this post). Everything you need to pass can be found on both the docs and learn sites, plus with this exam you get a free retake if you fail on your first attempt!

I completed Bryan’s course in just a few weeks (17 hours of video / 16 hands-on labs), and scheduled the exam a couple of days before my holiday started.

A pass would be a sigh of relief, whereas I would soon forget a fail during the break.

On the morning of the exam, I woke up to an e-mail stating - “There is currently a technical issue preventing your HashiCorp exam from launching. Do not attend your exam appointment.”. Best-laid-plans and all that!

My scheduled start time came and went, and after a long drawn out chat with PSI support (The testing platform) I managed to re-schedule the exam for the following week.

HashiCorp support was fantastic, if not a bit late to the party (Central Time - US). They took on all my feedback and spoke to PSI regarding my experience. If only they were based in the UK, I’m sure my stress levels would have been lower.

The extra few days I had to study were well needed (fate?), and I got to try out some scenarios in the labs that helped me improve my understanding versus rote memorization.

The content of the exam was well thought out, everything was clearly marked. I had no trouble navigating the infrastructure. My only gripe would be with the proctor, who stopped the exam several times in comedy fashion.

The first interruption came about 10 minutes in when I got asked if I was talking to someone. I realised I was unconsciously mouthing the lengthy scenarios as I read them, so decided to just keep my lips sealed.

Around 10 minutes later, I got asked if I was chewing gum. I guess that happens when I sit with my mouth closed for so long. I gave my excuses, then returned to the exam.

The next interruption came a little while later when I was asked if I had any other apps open.

I said no, the only app running was the exam app.

I got asked to maximise the app, to which I replied it was maximised already?

They said ok, carry on…

Five minutes later, the chat window popped up again, and the proctor said they could definitely see another app open on my laptop. I asked them what they were seeing as I could only see the secure browser? They replied notepad, and then the penny dropped…

My Theory: The hands-on labs were presented inside a virtual desktop, so while I was opening sessions, editing commands in VSCode / Notepad etc, the proctor must have thought that I was using my laptop. I explained the apps were part of the exam to which the proctor said ok, and let me continue with the exam uninterrupted.

Around two and half hours into the exam, I really needed to pee, but after my previous interactions with the proctor I didn’t want to risk asking them if I could leave the room.

I glanced at the nearly empty glass of water.

The camera could only see the upper part of my body.

I only had 1 more scenario to complete, so I just rushed through it and finished the exam with just enough time to make it to the bathroom.

My results arrived via e-mail shortly after sitting the exam (I passed - hurrah!). I was expecting to wait a few days while they reviewed my typos and checked how many times I used the online help. There’s no passing score or areas for improvement given, like on other exams. Just a relief inducing congratulations!

I can’t really go into any detail, other than what you will find on the HashiCorp website but what I will do is give you a few tips that helped (or would have improved) my exam experience:

Hopefully that has not put you off taking the exam as it’s totally worthwhile given the number of problems you can solve with Vault these days!

It’s good fun and much more rewarding than a traditional multiple-choice exam - so good luck, and show off your badge!

Adventures with HashiCorp Consul and a new way to listen to my music - Blast Radio!
Posted on Jun 1, 2022
Certification HashiCorp Music

Update on what I've been up to (or not) these last 12 months
Posted on Jul 21, 2021
Certification HashiCorp Book
comments powered by Disqus