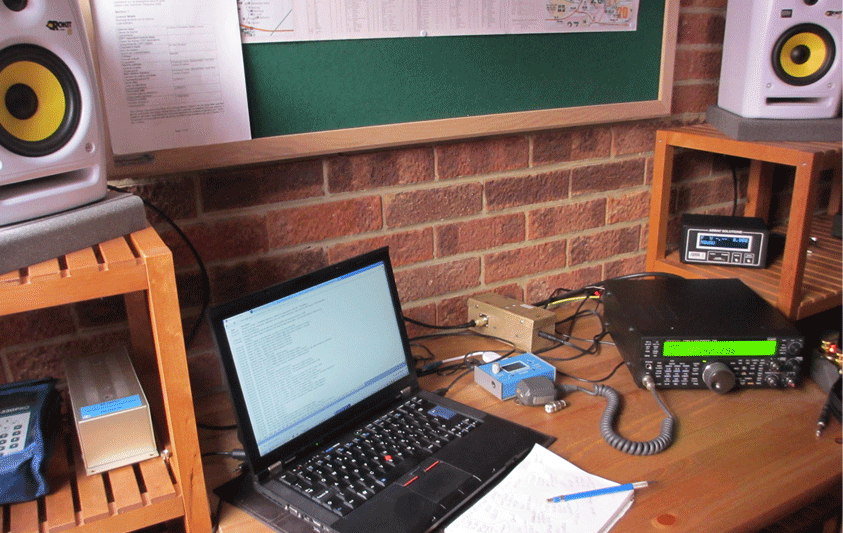 The story so far…

I guess you could say it was the recession that triggered my desire to delve into Amateur Radio. The downturn of 2010 saw many a business fall to the wayside, while those that managed to survive tightened their belts and reduced their investment in new technology. Open Source was still prominent but many developers were focusing less on innovation and more on keeping their jobs.

My brain was aching for something new.

I had originally been introduced to Ham Radio a couple of years back while working with Dominic Baines (M1KTA) but the recession had not quite taken hold back then and there was still a steady stream of development in the world of Open Source to keep me busy.

It was during 2011 while working alongside Mark Skinner (M0SEM) that the topic of Ham Radio re-emerged, and with my desire to learn something new I did what anyone introduced to a new field would do -I bought the Dummies book :)

While reading the Dummies book and listening to several Ham Radio podcasts on my drive to work (not at the same time…) I discovered a renewed thirst for knowledge.

It was not long before I found myself on the RSGB website seeking ways to obtain that all important Foundation License and “Get on the Air”.

Working unpredictable hours meant that attending an evening class was out of the question, so you can imagine my delight when I located a club nearby that offered weekend courses.

Lefars were about an hours drive away and offered weekend courses right up to Advanced License, just what I was looking for.

Having obtained several certifications in the past through self study, and feeling confident that I had read enough to get me through the Foundation License exam, I was sceptical as to what else I could learn other than performing the assessments - boy was I wrong!.

The tutors were extremely knowledgeable and made everyone feel welcome. I gained more practical knowledge in that two day course than I had done on any other non Ham Radio course previously attended, and on the 18th September 2011, along with a few new friends, we all passed the foundation exam and I got my first callsign - M6WAV.

Learning to run before I could walk

After having so much fun on the Foundation course, myself and everyone else on the course immediately enrolled for the Intermediate weekend.

The Intermediate assessment was the one I feared the most as it involved soldering a kit, something I had not done since high school (a long time ago…).

Needless to say, it was the most nerve wracking few hours of my life, made worse by the knowledge that everyone else round the table had done this before. I need not have worried of course as my Velleman Signal Generator worked a treat when connected to the oscilloscope, and on the 26th October I 2011 I got a new WAV callsign - 2E0WAV.

One month of intense study later saw those of us that had passed the Intermediate exam regroup for another weekend at the Lefars QTH.

This was a more focused event than the others as there were no assessments to be completed, only a multi choice exam whose results would not be marked on the day as the previous exams had.

Leaving that day was a sombre affair as I was sure I had failed the exam.

I endured a frustrating week of worry before the pink slip finally arrived on my doorstep, I had passed!

Within a few hours of receiving the letter I managed to secure the final WAV callsign in the trilogy - M0WAV and my journey into the world of Amateur Radio was about to begin.

To infinity an beyond…

So I finally have my License and a shiny Kenwood Transceiver but what aspect of Amateur Radio will I pursue? To be honest I really don’t know. Right now I’m happy learning something new everyday and feeding my ever hungry mind, after all that’s what got me here in the first place.

Take today for instance. I woke this morning and listened to the International Space Station answer questions from a school in Germany, then I hit 20m HF and worked a special event station in Croatia.

Tomorrow I plan on getting to grips with the Oscilloscope while looking at possibly building another kit (start small).

On Saturday I might even work you, I’ll listen out for you on the air….73’s from M0WAV